At the official launch of Essential Media Queensland in Brisbane on Monday 20 April 2015, the independent production company behind Rake, Saving Mr Banks, Jack Irish and animated pre-school series Bubble Bath Bay, unveiled its plans for a scripted content drive with the annoucement of an internship and mentorship program for Queensland screen practitioners. 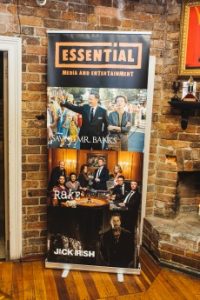 Spearheading Essential Media Queensland’s strategic development of scripted content from the Brisbane office, recently appointed Scripted Development Producer, Roger Monk [1], outlined an intensive 4-week internship program for one emerging Queensland producer and one emerging Queensland director. The successful applicants will be offered the opportunity to work across Essential Media’s Scripted, Factual and Kids departments between the Brisbane and Sydney offices.

An outcome driven Writer’s Mentorship Program is also being offered for three emerging Queensland writers or writer teams. Running over three months, the program aims to guide the writers in taking their projects from idea to a broadcaster pitch-ready stage via a series of creative consultations.

Introducing the Essential Media Queensland scripted development team and the initiatives to source and develop Queensland originated stories and storytellers (across film, TV, theatre, print), Monk said: “In our aim to foster existing relationships and build on new ones we are excited to offer these opportunities to emerging local screen talent and assist in developing their ideas into commercially viable and entertaining content.”

Applications for the Internship program open Tuesday April 21, 2015, while the Writer’s Mentorship program opens for applications in May, 2015. Details on the programs are available from the Essential Media and Entertainment website. www.essential-media.com

The Essential Media Queensland launch also hosted a Q&A session with multi award-winning screenwriter Andrew Knight (Rake, The Water Diviner, Jack Irish). Essential Media’s Head of Scripted Ian Collie said: “Established, successful Australian screenwriters such as Andrew Knight are a great inspiration to us all, no matter where we are in our screen careers and we are delighted he could share his experiences and anecdotes of working in the entertainment business with local industry on this occasion.”

Essential Media is a recipient of the Screen Queensland Enterprise program, an initiative designed to support the expansion of Queensland companies and build a strong base of producers developing local stories.

The company is currently co-developing a teen comedy drama series set in Queensland called The Time Shifters with Brisbane-based Carbon Media. The 26 x 24′ live action series follows the adventures of six misfit teens as unlikely heroes, thrown together in a remote destination to solve the ultimate mystery. It’s a journey of discovery that blurs reality, mythology and time.

Essential Media’s Head of Children’s and Family Entertainment, Carmel Travers said, “There is a wealth of original stories and storytellers in the state and we are excited by the prospect of working with Queensland’s production sector on projects in development and new ideas.”

[1] Roger Monk is an award winning scripted entertainment writer whose extensive experience covers drama, comedy, action and romantic comedy genres in both feature and television, with writing credits including the teenage live action drama series Nowhere Boys, adult crime drama The Doctor Blake Mysteries, and drama comedy East Of Everything. He won the AFI and FCCA ‘Best Script’ Awards for his 2002 screenplay, Walking on Water.

About Essential Media and Entertainment
Essential Media and Entertainment is one of Australia’s leading independent production companies with a proven track record in high quality screen and digital content for both local and international audiences. Based in Sydney, with offices in Melbourne, Brisbane, Los Angeles and Toronto, Essential is currently producing feature films, television drama, factual series, lifestyle programming and animation. Chris Hilton leads the company as CEO, with Ian Collie as head of scripted, Alan Erson as head of unscripted and Carmel Travers as head of children’s and family entertainment. Essential also produces factual entertainment in Los Angeles and Toronto through its joint ventures Essential 11 Television. Essential is represented by United Talent Agency in the USA.

About the Enterprise Queensland Program
Screen Queensland supports a creative, innovative and successful screen industry through development and investment; secures production to Queensland; and delivers an active screen culture across the State.

The Enterprise Queensland Program is designed to stimulate a strong screen community that prioritises strong returns on investment, build commercial and entrepreneurial capacity and help screen businesses achieve sustainable long-term growth. The program has been built to support Queensland-based enterprises and attract new and successful businesses to Queensland who will stimulate economic activity and who have a proven track record in producing any combination of feature film, television drama, television series, documentary or factual programming.