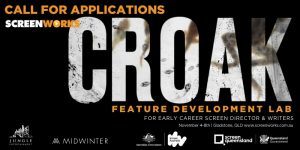 Screen Queensland together with Screenworks has opened applications for an opportunity for two early-career director/writers based in Regional Queensland to participate in a Screenworks Development Lab for a new feature film Croak.

The two successful applicants will receive a $4,500 stipend plus covered travel and accomodation expenses for the itensive workshop, taking place in Gladstone 4 – 8 November.

Croak, which received development investment from the Queensland Government through Screen Queensland, is a genre-twisitng, science-fiction comedy feature about a gang of teenagers who discover that their biology teacher is harbouring a dark secret with dire consequences.

The lab, delivered by acclaimed director Nash Edgerton together with Christiaan and Connor Van Vuuren, promises to provide insight into the filmmaking process.

Screenworks has partnered with Jungle Entertainment and Midwinter Films for the Croak Feature Development Lab, which also received funding through Screen Australia’s Enterprise Ideas program as well as investment support from Screen Queensland.

“In addition to SQ investing in the development of Croak set in regional Australia, this Screenworks lab highlights our commitment to investing in the skills of our regionally-based emerging writers and directors, by providing financial and geopgraphic accessibility to renowned expertise.

“The participants will leave the workshop with experience in developing a feature film which will assist in building their careers, and greater industry insight to guide their creative practice overall.”

Jungle Entertainment is well-known for producing premium comedy and drama for worldwide audiences and has a history of delivering successful and innovative productions. Jungle Entertainment produced the highly-acclaimed Logie winning Australian television drama Mr Inbetween commissioned by FX US, the first ever Australian SVOD commission No Activity, which went on to be remade by CBSAA in the US and is in its third season, the first scripted comedy commissioned by any Australian commercial network in 15 years and the highest rating new program in 2016 Here Come The Habibs and ABC2’s first ever comedy Review With Myles Barlow.

“We do everything we possibly can to support the creator’s vision” said Jungle Entertainment Development Executive, Features, Bridget Callow-Wright, “the Croak Development Lab is all about making spaces for innovative creators to do what they do best – tell stories that matter, take risks, and push the industry in a new direction.”

Croak is an original concept written by Shane Brady and co-written by Priscilla Cameron for Jungle Entertainment and Midwinter Films with Christiaan Van Vuuren and Connor Van Vuuren as directors.

Croak is a science fiction comedy with a big heart and green tinge. When coal-seam gas fracking forces Josh and Stacy’s family off their farm, their Mum takes a job in Galston, a booming coal and gas port. Josh, a sensitive nature boy, and Stacy, a knockabout country girl, are pitched into a new school in a new town amidst strange goings-on: pets vanishing and cars mysteriously crushed in the night.

To be considered for the Croak Development Lab, applicants must be able to demonstrate previous experience in screen directing and writing and be living in regional, rural or remote Queensland. Applicants also need to be available to travel to Gladstone in November.

Applications are now open and will close at 9am on the 26th August 2019.

He has directed nine multi-award winning short films, including Spider and Bear that have wowed audiences and entered cult status worldwide.

Christiaan Van Vuuren is one of the creators, writers and directors of the multi-platform comedy series Soul Mates, which premiered on ABC2 in 2014 and moved to ABC1 in 2015. Soul Mates is a spin-off of the successful web-series Bondi Hipsters which Christiaan co-created with Nick Boshier, for which he won an ADG Award for Best Direction in an Original Online Project in 2013, and whose YouTube channel has hosted in excess of 20 million views. The second series of Soul Mates screened on ABC and ABC iView in 2016.

He has also worked on Jungle series Squinters and Sando as director, and Foxtel’s comedy series The Slot as host, director and performer. Christiaan directed The Elegant Gentleman’s Guide to Knife Fighting for the ABC, the webseries Skit Box and Eastern Suburbs Mums, and the viral Skitbox video Activewear. He has also written and directed content for brands including Old Spice, McDonalds, Vittoria, AMEX, Cadbury, Coca Cola, and Sony. He is currently developing several television projects, and comedy-horror feature Croak.

Christiaan’s diagnosis with tuberculosis inspired his move into filmmaking, which began with his video Life in Quarantine, by The Fully Sick Rapper, which garnered over one million YouTube views.

Connor Van Vuuren is a writer, director, actor and stunt performer who graduated from UTS. Inspired by his brother Christiaan’s illness, together they filmed The Fully Sick Rapper, which went viral on YouTube. Connor and Christiaan are developing a number of Australian television and web projects, as well as comedy-horror feature Croak.

Connor is one of the creators, writers and directors of ABC2’s multi-platform comedy series Soul Mates, which premiered on ABC2. Soul Mates is a spin-off of the successful web series Bondi Hipsters, which won an ADG Award for Best Direction in an Original Online Project and garnered over 20 million views on YouTube. The second series of Soul Mates screened on ABC1. In 2017, Connor and Christiaan directed Jungle series Squinters and Sando.

Connor directed the sketch comedy series The Elegant Gentleman’s Guide to Knife Fighting for the ABC and Jungle Boys. Along with his brother, he has directed branded content for a number of brands, including Coke, Sony, Ikea, Cadbury, AMEX, and Unilever. Connor is also an experienced stunt performer; he has worked on productions including The Wolverine, I, Frankenstein, Mad Max: Fury Road, A Few Best Men, The Hobbit and Gods of Egypt.